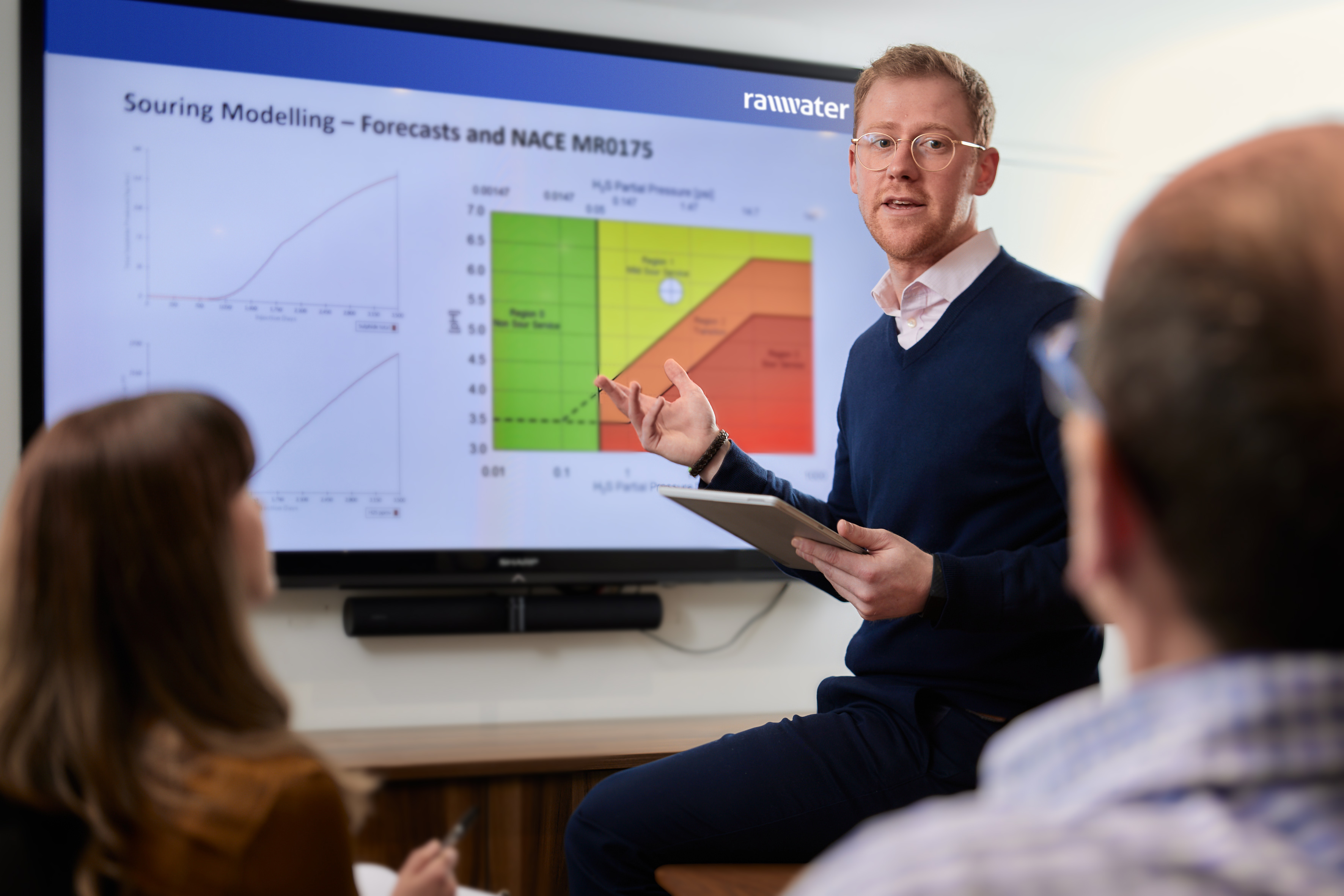 We use DynamicTVS© (TVS = Thermal Viability Shell), our industry leading predictive oilfield reservoir souring modelling program, to forecast the production of highly corrosive hydrogen sulfide (H₂S) over the lifetime of a reservoir. In fact such is the strength of the program’s database, DynamicTVS© can also be used to provide guidance regarding the likelihood of souring at the earliest stages of field planning and development.

DynamicTVS© can determine if, when and to what extent a reservoir will sour. Developed over many years, the software modelling program uses operational, planning and reservoir survey data to generate future profiles of hydrogen sulfide (H₂S) in all phases, under any temperature and pressure conditions.

The DynamicTVS© model considers the cooling of an oil reservoir due to water-flooding, the opportunity for growth of sulfate-reducing microorganisms (SRM) in the cooled zone, the transport of the H₂S generated by the SRM to the producer and the downhole and topsides partitioning of the sulfide at specified pressures and temperatures.

The DynamicTVS© software can predict a reservoir's propensity to sour in advance of well completion. Once the base case scenario is established, a real-time sensitivity processor is used to examine the effects of changes to multiple parameters. We have used DynamicTVS© to conduct a large number of reservoir forecasts on fields in the North Sea, the Gulf of Mexico, West Africa and the Middle East.

Our sulfide-partitioning calculator, Z-pred calculates equilibrium sulfide concentrations in aqueous, oil and gas phases for any temperature, pressure and water chemistry. It is essential for understanding the severity of oilfield reservoir souring. The software also forms part of the modules used in DynamicTVS©. Z-pred provides calculation of the partitioning of hydrogen sulfide in all wellstream fluid phases for both two-phase and three-phase systems under defined downhole and topside conditions. See Z-pred in action.

During secondary recovery, sulfate-rich water is injected into the subsurface to ensure continued oil production. This biologically active water contains sulfate-reducing microorganisms (SRM) which can readily utilise available carbon in the underlying formation water. This carbon often exists in the form of volatile fatty acids (namely acetate, propionate and butyrate) which can be oxidised by the SRM to reduce sulfate to sulfide).

Understanding the contribution of sulfide generation from the consumption of a set mixed VFA concentration is just one important aspect of understanding the souring propensity of a particular system (either in the laboratory or out in the field). Rawwater’s Metabolo calculator allows users to readily calculate an anticipated sulfide concentration from VFA oxidation.

See a ‘lite’ version of the Metabolo calculator.